The Zaltians are a species of sapient, bipedal amphibians indigenous to the planet Zalt, which has since been conquered by the Arcosian prince Koola and renamed to Koola No. 6.

With Zalt being a wholly aquatic planet with no exposed land, the Zaltians are a fully aquatic species, although given their bipedal nature it seems most likely that the planet once had exposed terrestrial environments and only more recently flooded, perhaps via the melting of ice sheets and glaciers—however, this is all educated speculation.

They have the uncanny ability to retract their head into their torsos, presumably indicating that they can either displace their internal organs or that they are not placed within their ribcage. The species are known to come in various hues, ranging from brown, to blue, to green. 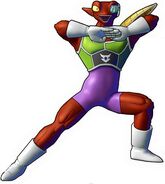 Neiz
Add a photo to this gallery

Retrieved from "https://allspecies.fandom.com/wiki/Zaltian?oldid=11543"
Community content is available under CC-BY-SA unless otherwise noted.