All Species Wiki
Register
Don't have an account?
Sign In
Advertisement
in: Pokémon, Eukaryota, Animals,
and 12 more

Mudsdale (Mudsdale banbadoro) are a species of equine indigenous to the Alola Region and introduced to the Galar Region of the Pokémon World which superficially resemble a Clydesdale Horse, an infraspecies that they are related to at the familial level. They are considered to be Ground Types.

They are notable for their powerful physiology as well as their stoic emotional fortitude, which keeps them from becoming agitated by anything. They will never cry out no matter what kind of trouble they may have gotten into.

Mudsdales are named not only for their physical similarities to Clydesdales, but also for the protective mud that will come to coat their legs. This mud is heavy and increases the weight of each leg, thus in turn strengthening the leg muscles and ultimately the force of their kicks. These kicks can defeat an opponent with a single powerful blow, but can also turn a vehicle into a pile of scrap.

Both because of the heaviness of their legs as well as their strong defensive kicks, Mudsdales have not evolved to possess a particularly swift running speed, though they have shown to instead possess excellent power and stamina behind their pull: A single Mudsdale can drag loads of over 10 tons for three days and nights before tiring. Their heaviness however has lead to their becoming forbidden to run on some of Alola's public roads, as an earnest (though slow) gallop will dig out potholes even in asphalt with every single hoof-clop.

Caught Mudsdales have been known to exhibit abilities such as Own Tempo or Stamina, and are known to utilize Highhorse Power in combat.

A rare genetic mutation gives the Mudsdales a different coloration in its coat. Those with this condition have a golden coat and blued hair. Like other known Pokémon, only about 1 in 2048 members are afflicted with this condition.

Immediately upon being born, young Mudsdales are known as Mudbrays. Easily mistaken for Donkeys at this stage in their life, though they are in fact more closely related to Horses. Even at such a young age it's skilled at making use of mud. Eating dirt, making mud, and playing in the mire all form part of its daily routine. It eats dirt to create mud and smears this mud all over its feet and hooves, giving them the grip needed to walk on rough terrain without slipping, as well as enhancing its powerful running gait.

This affinity for mud is so strong that if domesticated members of the species aren't showered with mud on a daily basis, they get stressed out and stop listening to its Trainer. It has a stubborn, individualistic disposition and possesses mighty power, Mudbray can be loaded with 50 times its own body weight and will be totally fine, posing no issue for this Pokémon.

Once a Mudbray reaches maturity, it becomes known as a Mudsdale. Standing at 8'02" (2.5 m), these large equines are far larger than the Clydesdales that they resemble, which only stand at 5'02" - 6' (1.63 - 1.83 m). Mudsdale have short, brown fur covering the majority of their bodies. A huge mane is a primary feature that segregates it from horses; this covers the outside of their ears, extends down around its eyes and cheeks, drops in dreadlocks from the sides of the head, and continues along the spine in a thin line before terminating merging with the tail. Like Zebras and unlike horses, the mane (at least the upper section) stands on end, giving it an almost Mohawk appearance.

The tail again forms a dreadlock due to its unkempt nature, albeit much thicker than those found along the sides of the head. Like some breeds of horses, extensive feathering can be found around its lower legs, though these are invariably caked in mud to form their incredible defense. They appear to spend much of their time in mud, as mud can also be found caked around their tails and dreads, as well. Orange markings along the face and an orange stripe through the upper section of the mane may also in fact be mud, as well.

Their eyes are heavy-lidded, with a red rim along the bottom. The inside of their ears are brown. 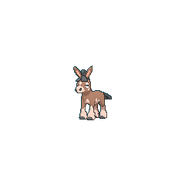 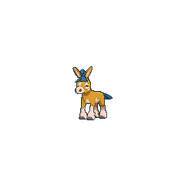 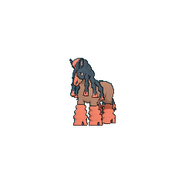 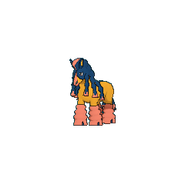