All Species Wiki
Register
Don't have an account?
Sign In
Advertisement
in: Mortal Kombat, Eukaryota, Animals,
and 14 more

The Edenians are an extradimensional human species from the realm of Edenia.

Nearly indistinguishable from modern-day humans at a glance, Edenians are in fact descendants of the gods of the realms which grants their species perceived nobility along with heightened strength and extremely prolonged lifespans — the princess Kitana is 10,000 years old and still considered to be youthful.

Edenians are adept at magical skills. They are known to use wind magic to levitate and manipulate sonic waves.

The Edenians worship several deities, including but not limited to Argus and his wife, the sorceress Delia.

10,000 years prior to the 1990s, the realm of Edenia was ruled over by the benevolent monarchs, King Jerrod and his wife, Queen Sindel. The two had one daughter together whom they named Kitana. However it was during this period of time that the realm was invaded by the then-current Outworld emperor, Shao Kahn after he defeated their champions in a Mortal Kombat tournament.

While the realms were merging the Edenians and Outworlders went to war against one another. The general of the Edenian army secluded away his son, Rain, but was killed in the ensuing battles and was unable to reclaim his child. Ultimately Edenian lost the war and Shao Kahn himself slew King Jerrod and took Sindel as his new wife and along with her, Princess Kitana as his newly adopted daughter. While it was once thought that Sindel was forcefully betrothed to the Kahn she later revealed that she had been in on the invasion plot the entire time and married Shao willingly. The souls of those Edenians defeated in battle were then forcibly ripped from their bodies and sent to Netherrealm, where they would culminate over time and merge into the amalgamated body of Ermac. At some point in time, Queen Sindel was killed; this would lead directly to Shao Kahn's attempt at taking over Earthrealm ten millennia later.

During Earth's 20th century, Sindel's soul was reincarnated in that realm and Shao Kahn used this opportunity to invade the Earth with the excuse of wanting to reclaim his long-lost (stolen) wife. Shao Kahn however was defeated in this attempt and with Queen Sindel resurrected, she reclaimed rulership of Edenia and its people which now saw separation from Outworld with its former ruler's defeat. Despite having aided Shao Kahn in the past she now sought justice against him, though it is possible this was only to appear loyal to her own people. Despite this, the daughter of an Edenian ambassador, Tanya, still betrayed the Edenian peoples and allied herself with the Elder God Shinnok to allow the armies of the Netherrealm to invade instead. Shinnok too would be soundly defeated and seeing an opportunity to continue to seek justice, Princess Kitana allied her people with the Shokan to help stop Shao Kahn once and for all. Unfortunately this too would prove unfruitful when Shang Tsung and Quan Chi aligned themselves together and the subsequent resurrection of the true emperor of Outworld, Onaga the Dragon King. Onaga would then travel to Edenia and capture both Queen Sindel with the aid of Tanya, proving that the two were unlikely to have been in cahoots over the Netherrealm invasion. Luckily, even Onaga was defeated and Edenia was freed once more.

Ermac, an amalgam of thousands of Edenian souls 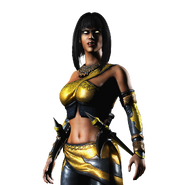 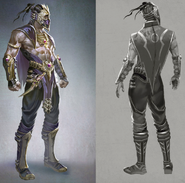 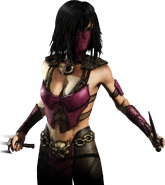