All Species Wiki
Register
Don't have an account?
Sign In
Advertisement
in: My Little Pony, Eukaryota, Animals,
and 14 more

Cutesaurus (Cutesaurus oskilida) is a conjectural name for a species known by only one individual, the aforementioned Cutesaurus, who once was known to reside in the region of Ponyland and serves as the species' holotype.

Cutesauruses are short sauropods that appear to be closely related to Brontosauruses. They hold their necks upright and have a long shock of chartreuse hair flowing out from their heads. Their tails have become shortened and are generally held in an position slightly over their backs. They have a strong skeleton and musculature, as they are able to push over huge rocks with ease. 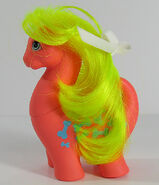 Side view of a Cutesaurus