All Species Wiki
Register
Don't have an account?
Sign In
Advertisement
in: Minecraft, Eukaryota, Plants,
and 6 more

Creepers are the most unique monster found in the Minecraft universe and is often seen as the game's, and even the parent company Mojang's, mascot. Interestingly, many players have been known to refer to the Creepers as both their favorite and most hated game aspect.

The body of the Creeper, as revealed in the Mobestiary, is surprisingly more detailed than presumed. 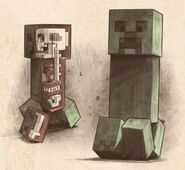 The Creeper is a genetically mutated form of Peat Moss, it lies in Peat Mosses loose ancestry, and their texture resembles that of Peat Moss. The mutation was possibly formed during a shortage of Peat Mosses, as "moving plants" they would explode around humans, as spores could produce rapidly on a deceased body, due to the nutrients.

Recent research has indeed shown that they come from the Eukaryote domain, and do not descend from the Animal Kingdom, but those of the Plantae. They have a Byrophyta Phylum, with a Sphagnospida class.

The bottom of the creeper (its legs) contain a thick bone structure, in order to carry the weight for the rest of the body. Its front legs are for the actual walking, though its hind legs are for sturdiness, balance and support. The creature's torso contains the most vital organ, which, as opposed to popular belief, is not a TNT, but most likely a sac of tissue which safely secures gunpowder. The tissue, being loose, will only tear apart in the event of the heating of the blood, which is caused by being in the explosive radius of a player. Located above this organ is the small resemblance of the heart. Creepers do indeed have blood, but the heart oxygenates it, as well as pumping it around the acting like a lung.

Located in the Creeper's head, is the Nuclei, which is a resemblance of the brain. The Nuclei controls the Creeper, and is surrounded by a skull. There are two cords which go from the body to the Nuclei, and vice versa. The first is possibly to provide nutrients and blood to the heart, the other from the Nuclei to the body, which gives signals to The Heart. These signals will determine the temperature of the blood.

Most probably, The Creepers photosynthesis. This would explain their constant source of energy, as well as their green colour, as photosynthesis requires chlorophyll, which produces the bright green colour. Unlike variants of Skeletons and Zombies, Creepers are not undead, and so their green colour almost certainly isn't the product of a fungal decay that forms rotting flesh. Located around the skin of the Creeper have millions Reproductive Spores. These spores are released at 8650 mps, giving it a wide range of potential reproduction.

Creepers fundamental neurological property is its antisocial behaviour, and the liking to enter a solitary state, possibly due to not wanting to have competition with other Creepers and their spores.

The Creeper was created entirely by accident when Notch, creator of Minecraft, attempted to create the game's first passive mob, the Pig. However, he mixed up his axes and wound up creating a creature that was tall and slim, roughly that of the game's players. Its legs remained as they should however, giving it that "unique stumpy leg, tall body" look.

Creepers have been determined to be a species of mobile peat moss through thorough scientific deduction performed by the YouTube channel Game Theory. They have the texture of dried, crunchy leaves. It can be assumed that their tall, slim body allows them to better keep an eye out for potential victims. Unfortunately for adventurers, Creepers conduct electricity and if struck by lightning they become so charged with energy that they are referred to henceforth as a Charged Creeper, a far more dangerous foe to contend with.

Creepers intend to spread their spores to organic tissue, and as such seek out viable options - usually this consists of Human adventurers, although should they reach a near-death state they will detonate themselves in a last ditch effort to spread their spores. It is not known why Creepers prefer the organic tissue of Humans, though their lack of significant body hair may make it easier for Creeper spores to attach successfully.

This leads to Creepers stalking Humans, especially adventurers out in the world. Once they have closed the distance between themselves and their intended target, they will initiate their self destruct sequence in order to launch their spores, yet if the target moves out of close range too quickly, the Creeper can stop this procedure and return to chasing after its opponent. After a certain point however this sequence cannot be stopped, giving an adventurer a small window of time to successfully escape their wrath. For unknown reasons, Creepers tend to walk to the right of their target. Luckily, when the sequence is started a very distinctive hissing sound can be heard, along with visual cues of swelling and flashing of the Creeper itself. It takes about 1-2 seconds for the sequence build up, and 3 full seconds for the procedure to complete its course. Their detonation is surprisingly powerful, and can destroy not only topsoil but occasionally stone as well; however this force is drastically diminished in water to the point that only the ground they are standing on will be damaged - organisms in range are still at risk, however.

Although they cannot use doors due to a lack of hands, their feet allow them to climb ladders.

For unknown reasons, Creepers fear felines such as Domestic Cats and Ocelots. One possible explanation is that cats may view their leafy form as similar to catnip. Canids such as wolves however are found to fear or at least remain highly cautious around Creepers.

Charged Creepers (also known as Electric Creepers or Lightning Creepers) are Creepers which have been electrified with the intense energy of lightning. This occurs whenever lightning strikes near enough to a Creeper (within 3-4 blocks) and as such, is thankfully a rare sight. However, this increase in kinetic energy drastically ramps up their detonation force and affected radius, bringing it to a level stronger than a box of TNT.

Charged Creepers can be distinguished by the blue aura surrounding them, made up from the glow of the electrical field coursing through them. As they are not immune to lightning strikes, they are injured in the process of the "transformation", meaning it will take fewer hits to subdue one. Their "countdown timer" is also the same as that of a regular Creeper.

Community content is available under CC-BY-SA unless otherwise noted.
Advertisement