This article is a stub. You can help All Species Wiki by expanding it. 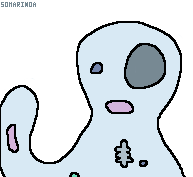 The Amebzians (pronounced \ɑː.ˈmɛbˌ.ziː.ɛn\) are a race of cellitient amorphs who instinctively mimic the shapes or "outlines" of other organisms. As cellitients, each and every cell in their body is sapient. Their naturally mimicry occurs when they focus an individual's attention is placed on another organism of another species; at this juncture they subconsciously take on its overall shape, albeit at a less than perfect level. Because of this procedure, however, they have trouble spending time amongst large groups of varied races, and are therefore typically found in either the dark corners or segregated sections of colonies or found not at all upon them, as the strain is much too difficult for many to handle. Nevertheless, they support their affiliation, the Iskian Empire, in what ways they can.

Naturally, they evolved within the local cytofields near plasmaflows of their homeworld. Here, their natural mimicry allowed them to both sneak up on prey as well as hide from would-be predators, and the intelligence of each cell needed to perform such mimicry acts allowed for them to eventually gain cellitience. Like an amoeba, their exact lifespan is immeasurable, as a single entity simply splits in two to procreate, meaning that technically the very first modern-day Amebzian is still alive today, since they are essentially clones of one another. At the same time, the split through mitosis into two separate individuals can also be considered the death of the original, although this is widely debated amongst scientists.

Community content is available under CC-BY-SA unless otherwise noted.
Advertisement